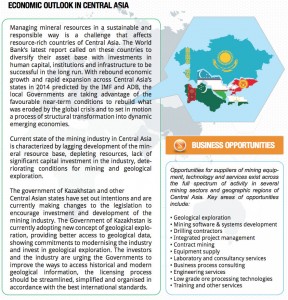 Central Asia is the core region of the Asian continent and stretches from the Caspian Sea in the west to China in the east and from Afghanistan in the south to Russia in the north. In modern contexts, all definitions of Central Asia include these five republics of the former Soviet Union: Kazakhstan (pop. 16.6 million), Kyrgyzstan (5.5 million), Tajikistan (7.6 million), Turkmenistan (5.1 million), and Uzbekistan (29.5 million), for a total population of 64.7 million as of 2012. Other areas sometimes included are Afghanistan, Mongolia, eastern Iran, and north-western Pakistan, and sometimes Xinjiang and Tibet in western China, the Kashmir region of northern India and northern Pakistan, and southern Siberia in southern Russia.

Managing mineral resources in a sustainable and responsible way is a challenge that affects resource-rich countries of Central Asia. The World Bank’s latest report called on these countries to diversify their asset base with investments in human capital, institutions and infrastructure to be successful in the long run. With rebound economic growth and rapid expansion across Central Asia’s states in 2014 predicted by the IMF and ADB, the local Governments are taking  advantage of the favourable near-term conditions to rebuild what was eroded by the global crisis and to set in motion a process of structural transformation into dynamic emerging economies. The government of Kazakhstan and other Central Asia states have set out intentions and are currently to making changes to legislation to encourage investment and development of the mining industry.

Key challenges and priorities in the mining industry

Opportunities for suppliers of mining equipment, technology and services (METS) exist across the full spectrum of activity in several mining sectors and geographic regions of Central Asia. Key areas of opportunity include:

•Training and other services

International experts have a positive outlook on the potential of Kazakhstan’s mining and metals sector with dynamic development forecasting over the next five years. Recent reports by Engineering and Mining Journal (2010) and Business Monitor International – BMI (2013) confirm the huge potential of Kazakhstan’s mining and infrastructure sectors, noting Rio Tinto’s commitment to invest US$100 million in copper exploration in northern Kazakhstan.

The Republic of Uzbekistan is one of the 10 leading countries in the world for deposits of gold, uranium, copper and rock and potassium salts. The coal mining industry is a key part of the economy, with surveyed coal deposits reaching 1832.8 million tons. Forecasted resource deposits reach more than 3.5 billion tons.

After Russia, it is the second largest producer of Gold in the CIS and boasts large reserves of uranium, copper, lead, zinc, silver, molybdenum, tungsten, coal as well as industrial minerals. Inward investment is fundamental to the industry and currently over 200 foreign companies contribute some US$10 billion (20% of the total investment). As mines throughout the country look at modernisation programmes, large contracts to supply equipment are being offered and more recently, awarded to international companies who have successfully entered the market.

The mining industry of the Kyrgyz Republic, which produces over 20% of GDP, consists of processing industry, non-ferrous metallurgy and mineral resources industry.

With 18.5 tonnes of gold produced in 2011, gold mining remains essential for the Kyrgyz economy. The “Kumtor” gold-mining project is one of the most significant commercial ventures in the Kyrgyz Republic. This enterprise generates nearly 35% of the country’s total exports and is responsible for generating approximately one-tenth of the domestic production. Kyrgyz Republic is the third among other CIS countries for gold-mining output.

Gold mining industry is very attractive in Kyrgyzstan, but it bears some risks. Since March 2005 Government has been having political unrest, and that created an unstable situation for potential investors. Government is trying to negotiate better now and have more favourable conditions for Kyrgyzstan when issuing licenses, which creates some uncertainty among the present investors.

Promoting good governance and a favourable investment climate is paramount to the development of Kyrgyzstan.

Underneath Tajikistan's ever-present mountains lie a wide array of natural resources, many of which have not yet been exploited because of their geographical location or geological depth. For its size, Tajikistan is relatively blessed with silver and gold deposits. Total silver ore deposits are estimated at 60,000 tons and the largest, in Koni Mansur, is around 38,000 tons. There are more than 30 known gold deposits, of which only a few have been prospected. Several potentially important coal deposits have been identified but have not yet been exploited. May of the mineral deposits are suitable for relatively inexpensive open-pit mining, but they are found in mountainous regions where extreme weather conditions prevail and transportation routes are difficult or non-existent. There is some coal extraction at the Yaghnob mine in the Sughd Region, while a number of other coal deposits have not yet been exploited. A large antimony deposit has been discovered in the Khovland district southeast of Dushanbe.

Turkmenistan is interested in attracting investors to re-equip the mining industry.

According to the report issued by the Turkmen Ministry of Petroleum and Mineral Resources in June 2013, there are more than 200 different fields of solid minerals in Turkmenistan, most of which are located in mountainous areas. "As for already explored deposits, the principal objective is to expand the list and product quality, to conduct the marketing research and to promote goods on the world market, to conduct the technical reequipping of the mining industry, to attract investors, including foreign ones to develop the perspective deposits."

Mineral resources are distributed unevenly throughout Turkmenistan. The existing mineral resource base of solid minerals is thoroughly analysed and re-valuated, based on the current market realities, transport conditions and costs, economic viability and continued development of existing fields.

Turkmen territory is rich in deposits of mineral salt, native sulfur, bentonite, quartz sand, kaolin and raw materials for the production of building materials required to meet the needs of enterprises of the national economic complex of the country in mineral raw materials.

Two major strontium ores fields of (celistin raw materials) – "Arik" and "Sakyrtmin" have been discovered and explored in Turkmenistan.

Turkmenistan had the world's third-largest reserves of sulphur.

Turkmenistan's main natural resources are oil and natural gas reserves. According to them, the country holds one of the leading positions in the world.